Marketers produce massive value for the global economy however most people don’t perceive marketing as an honored profession. In fact, according to a recent Gallop Poll, only 11% of people rated the honesty and ethical standards of advertising practitioners as very high or high. The only two professions that were lower were members of congress and car salespeople. Why is the perception of marketing professionals so poor?

There are several reasons, but I think that one of them is that marketers produce intangible rather than tangible value. We can’t always measure the intangible value because it is something that we experience in our mind. And because of that people often think of intangible value as being inferior or not real.

Take the house you live in for example. The land and building has real tangible value and a price that can looked up on Zillow.com. However your “home” contains tremendous intangible value for most people. Your home contains the emotions associated with the collective memories of experiences shared with your family over the years and that is priceless.

If you look at some of the most successful brands, a large portion of their value is considered to be intangible value. 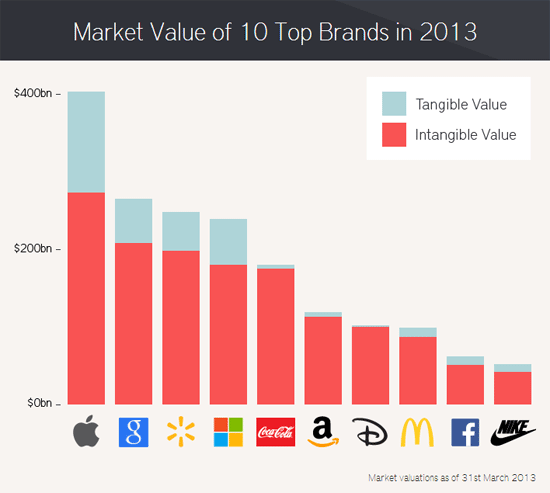 Click image to open interactive version (via My Asset Tag).

A good example of a wildly successful company that is mostly intangible value is Apple. The Apple laptop does not perform essential functions like browse the Internet or run programs significantly better than an Acer laptop, and yet the Apple has a significantly higher perceived value. Most of the difference in value comes from the brilliant marketing that has resulted in a strong emotional (and sometimes irrational) attachment to the brand. This intangible value is real value that gets people to pay a large premium.

However, the innovators are often given most of the credit while marketers are often made out to be manipulators or villians (e.g. Don Draper). The engineers or the visionary entrepreneurs are praised and admired for creating massive value. Marketers should also be appreciated for the value they create. As Darmesh Shah said at Mozcon 2013, “Let’s make marketing a noble profession.”

Charles Sipe is an online marketing specialist from Seattle and shares interesting marketing links on Google+ and Twitter (@charlessipe). If you have any questions, he can be reached at charles(at)spacecraftdigital.com.